When you think about asbestos, you probably think of it as a building material, but it can be found in a variety of places, including older cars. Asbestos used to be a popular material because of its high level of fire resistance, and up until the 1970s it was used in gaskets, clutches, and other car parts. However, asbestos was later found to cause a variety of lung conditions and cancers, and since then it has had to be removed from properties all over the world. Australia has also put a blanket ban in place to stop the import of goods that contain asbestos, and so those who collect classic cars have faced difficulty bringing them into the country.

The initial ban on importing goods with asbestos was brought into law back in 2003, but in July 2017 a warning was issued by the Australian Border Force (ABF) that a harder stance would be taken against those flouting the laws. Asbestos testing is carried out on imported items that are deemed to be a risk by the agency, even if the importer has declared that the item doesn’t contain the material, and importers are expected, by law, to know whether an item contains asbestos.

If an item is suspected to contain asbestos, then the ABF will only accept certification from NATA accredited labs to confirm no asbestos is present. Importers need to know the supply chain “back to the point of manufacture”, and be sure that no asbestos has been used at any point. Their notice states that importers need to “obtain sufficient information, prior to shipment, when unsure of any asbestos content, parts or components accompanying the primary item of import that are a risk (such as gaskets), or whether asbestos was present at any point in the supply chain process”. If they’re unable to produce this evidence, then testing may be needed.

Because of these additional steps to bring classic cars into the country, the number of older cars being imported has dropped considerably. To rectify this, the Australian Imported Motor Vehicle Industry Association has stepped in to try and create a standardised inspection process, which could cut costs and make the process clearer, but so far nothing has been put in place. The ABF responses that they aren’t trying to create inconvenience to importers, but rather that they had a duty of care towards the public when it came to asbestos.

As well as issuing warnings about their new “hard line” approach to older car imports, the ABF has been carrying out a larger number of tests in recent years. In 2013 to 2014, a total of ten tests were carried out, with zero infringement notices filed. However, in 2016 to 2017, 742 tests were carried out, with 13 infringements found, showing that ABF are taking asbestos risks much more seriously.

A report published in The Australian in August 2016 may have led to the ABF brining in tighter regulations. The article noted how a large number of asbestos-containing products, including gaskets and car parts, had found their way into Australia. This led to a number of senate hearings on the subject in January 2017, and the renewed notice being issued.

Another reason why collectors might be more reluctant to bring classic cars to the country is the high costs of testing. This can include:

An example of asbestos costing a collector dear is that of Terry Healy. Importing a Ford Mustang and Shelby GT 350 to Australia, he faced costs of $15,000 for extensive asbestos testing of both vehicles, and then faced a further bill of $12,00 to repair damage. Parts of the cars found to contain asbestos included brake pads, brake shoes, and gaskets, meaning they had to be replaced and the damage rectified. Other collectors have reported that asbestos tests have almost added up to the value of the car that they’ve imported, effectively wiping out any profit they might make. These costs can also include the cost of hiring a specialist classic or European car mechanic. 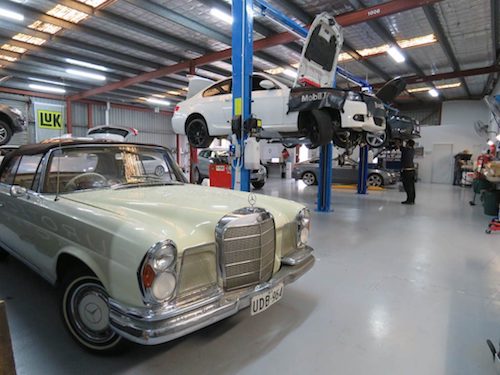 There are exceptions to the ban on goods that contain asbestos. If the goods only contain trace amounts of asbestos, sometimes found in natural materials, or the items are being brought into Australia for research or analysis purposes, then exceptions are sometimes granted. However, with individual fines running up to $180,000, it’s important to comply with regulations when importing anything into the country.

If you’re considering importing a car into Australia, especially one made before the 1970s, it’s important to find out whether it contains any trace of asbestos. If you’re unsure, then you should try to arrange testing in an approved lab before it arrives in the country, so you don’t fall afoul of the law and end up with a large testing bill.